Transitioning to the crib was a concern I had so we tried to make the transition as early as possible. We created a strategy and thankfully the transition to the crib took just three days using the DockATot (get $10 off a DockATot using this affiliate link). Let me preface these baby sleep tips by saying Aiden has always been a pretty decent sleeper. If you have a not so great sleeper, you may want to check out this post on ways to get your baby to calm and sleep which is a guest post by a baby sleep consultant.

Also, it’s important that I say upfront that the DockATot is not approved for overnight sleeping. Our pediatrician was OK with us using it in the crib as long as he isn’t rolling (which he is not). This is our personal experience. You should definitely check with your pediatrician if you have any questions.

Aiden has slept in his own room since the first week he came home — in his Rock and Play. We really liked the Rock and Play because he had gas issues so the incline helped and the vibration seemed to help him stay asleep. About a week ago we noticed that when we came to get him in the morning his legs would be up almost over the front of the Rock and Play so we decided it was about time to transition him to the crib. 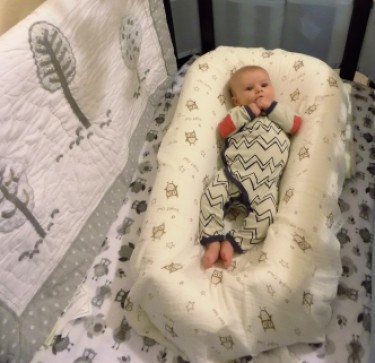 Affiliate links are included, which means if you make a purchase I may receive a small commission at no additional cost to you. I only write about products I love. Thank you for supporting the brands that support this blog.

BABY SLEEP TIPS FOR TRANSITIONING YOUR BABY TO CRIB

We knew this day would come (although we thought it would happen closer to three months) so we have been trying to put him down for naps in the DockATot which is flat and we figured if he was comfortable with it, it might make the transition to the crib easier. It seems to have paid off!

Tips for transitioning to the crib:

Here is our experience with transitioning to the crib:

We swaddled him and then placed the DockATot in his crib and did our usual routine of rocking him to sleep. Once he was out, we put him in the Dock and he slept for about five hours before he woke up for a feeding. After the feeding, I put him back down but he woke up about every hour after that. We think it may have been related to gas because he just ate and then was lying flat.

We did the same routine as night one, EXCEPT, this time we put a few blankets under the Dock so there was about a 45-degree angle (it is important to note that Aiden is not rolling yet). You can also get a crib wedge for this exact purpose. He slept for six hours and then woke up for his feeding and went back down without waking up again.

He slept through the night! Our plan is to keep him elevated at least until he starts rolling and then we will try him lying flat again (without the DockATot).

Update! Using the Dock and swaddle proved to be a great help in transitioning to the crib. It also helps when we have gone out, or out of town, because it is familiar and reminds him of sleeping. He has slept really well through the night and we didn’t really experience four-month sleep regression.

Did you have an easy or hard time transitioning to the crib? Any other baby sleep tips you want to give? Share your experience!

Hi, I’m Melissa! I am a mama to an energetic preschooler and newborn, a wife to my amazing husband Dan, and I work full-time as a meeting planner. I started this blog because, after having my first little guy, I quickly learned that exhaustion and baby brain causes you to forget some of the amazing (sometimes horrible and sometimes wonderful) details related to the first several months of raising a baby. Realizing that we would probably have more kids in the future, I wanted to document everything, so we would remember what worked the first time around, and hopefully help other first time mamas along the way!

You may also enjoy:

What I write about

Check out my latest video

Traveling With a Car Seat